During your work with GreenLight's sensors you will sooner or later come to the point where you have to change a sensor's configuration. While changing a schedule or adding a new node will not affect the sensor's result, changing the port or even timeout of a Network Port TCP sensor will. This is due to GreenLight's ability to store historical data.

When to outdate sensor data

Imagine a Network Port TCP sensor monitoring port 80 of a Server for some weeks/months. Then the port gets changed to 443. A chart including that data would be completely mixed up and therefore useless.
To prevent such a scenario GreenLight (version < 2.6) always disconnected the old sensor data from the new sensor. With GreenLight 2.6 and later you can choose to disconnect the data from a newly configured sensor. 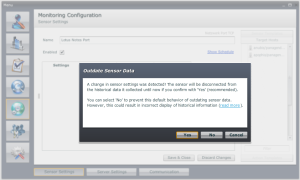 Pressing Yes will disconnect the sensor data from the newly configured sensor (like in GreenLight < 2.6). Pressing No will simply save the sensor with it's new configuration.
You should only press No if you are absolutely sure the changes will not effect the sensor results in an unexpected way, your charts and reports will remain consistent and meaningful and the conditions for your notifications/alerts
will not be affected. 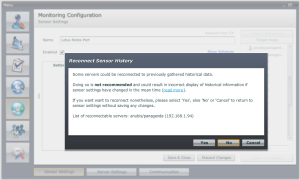 Pressing Yes will connect the historical measurements to the new measurements for the node. This will allow you to create Charts, Reports ... using all the collected data for the node (there will, of course, be a gap for the time when the node was not a sensor target).
Pressing No will let you continue without reconnecting the node - this is the recommended option.