This new version is a fix release for version 1.6 and includes several bug fixes as well as a few minor improvements.

In addition to the existing languages English and German, three new UI languages have been added: Chinese, Dutch and Japanese. There was so much demand for the Asian languages that we decided to release them a tad earlier than we intended, thus they are labeled BETA for now, even if it's more of an early access.

Login Screen of with Language Selector 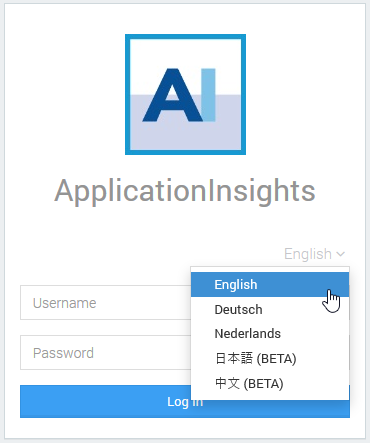 Localization: a first step towards localization of number formats has been made. In this initial stage, the locale for number formatting is now tied to the selected language. In upcoming releases we plan on making available more granular configuration options.

Anonymous Usage: an issue has been resolved that would prevent anonymous web traffic from being factored into usage calculations.

Data Export: an issue has been fixed that would prevent export functions from working on a number of pages.

Data Protection: a bug has been addressed that would lead to persons and departments not being anonymized, even though that is configured.

Design Collection: a bug has been fixed that prevented embedded Java code to be written properly to the database.

Multilingual UI: a number of typos and minor inconsistencies in translations has been addressed.

Embedded Java Code: In certain situations Java code will still not be visible in ApplicationInsights, even though this version has brought a bug fix regarding the issue. Please contact support@panagenda.com in case you encounter situations where Java code appears to be missing.

After installing the update, parts of the application may not be available until the DWH is rebuilt. This process runs nightly, but can be triggered manually after the update. On the first login after the installation, more information on this topic will be displayed, along with the option to trigger the rebuild.

Details on how to update to this new version can be found in the knowledge base article Upgrading ApplicationInsights.