panagenda is proud to announce this new release of iDNA Applications. Whether you’re modernizing or migrating Notes/Domino, iDNA gives you the knowledge to deliver the most difficult projects efficiently, on time and on budget. This new version brings a lot of value with many new features, improvements and bug fixes.

These new dashboards make it easier than ever to find out about department and location activity. See which applications they accessed when and how many users were active.

Similar to looking up activity by department, we have also added the capability to drill down into activity by user and replica set: 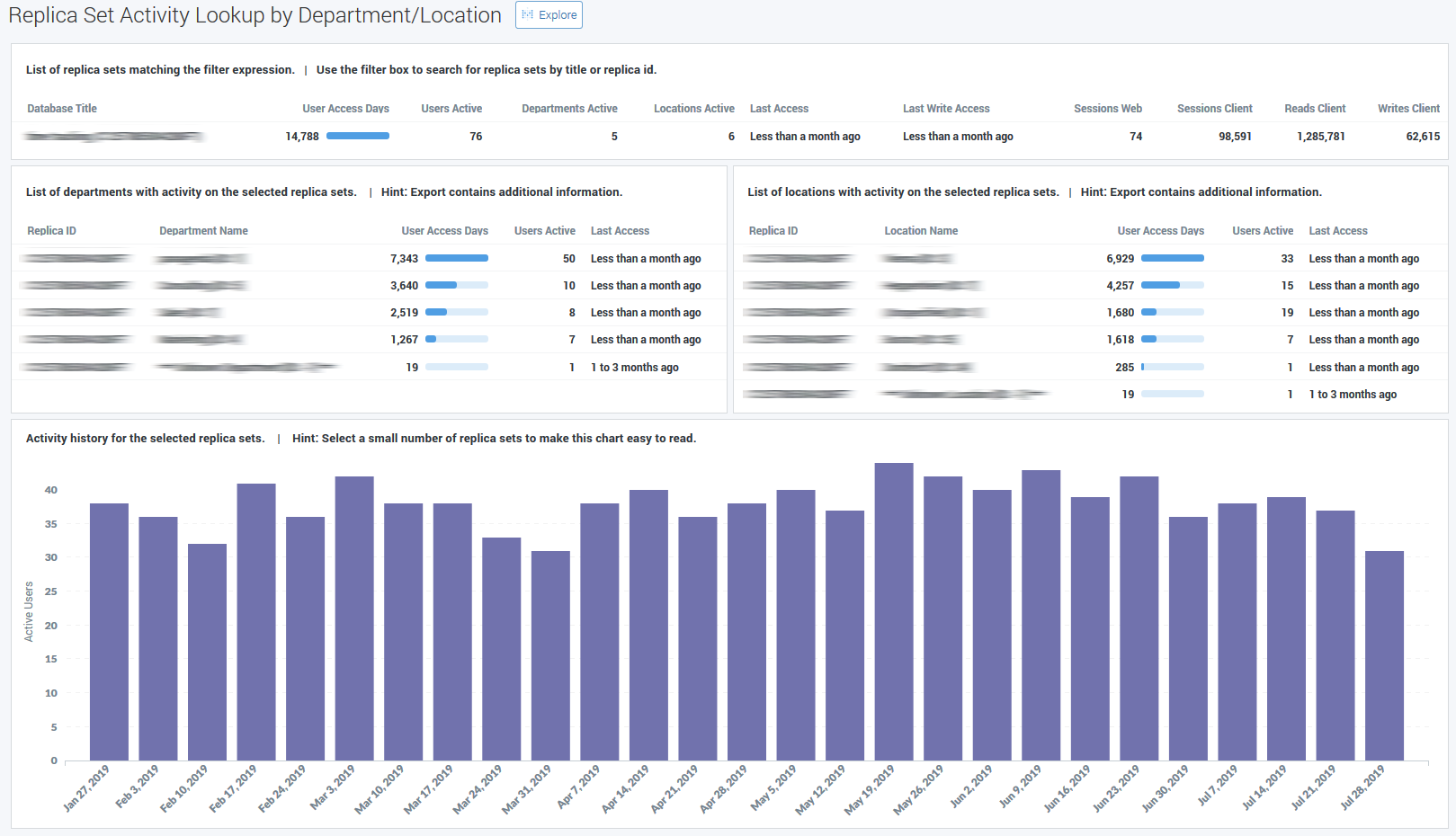 This feature is especially useful when trying to identify application owners or responsible cost centers.

Where previously a detailed catalog view only existed for database instances, a fully featured grid is now available for replica sets as well.

Controlling what is considered a Focus DB

After some much appreciated feedback from customers and partners, we have added this new feature which gives control over database type categorization. The main use case here is being able to determine what is counted as Focus DBs and what is not. This was previously done automatically and could not be changed.

See this knowledge base article on the topic for more detailed information.

Web logs have always been a heavy hitter when it comes to disk usage. With this new feature we allow some granularity around what is being collected from Domlog and how many details are actually stored in our data warehouse.

From this version going forward, iDNA Applications will use new default configuration settings for Domlog collection. The new settings will reduce disk usage caused by Domlog by over 50% in most customer environments. As a trade-off some limitations now apply:

The old default settings can be restored using the settings described in the knowledge base article on the topic.

Data Export: Titles in CSV and Excel exports are now "flattened" if they are displayed in multiple levels in the originating grid. This will make it considerably easier and more comfortable to work with Excel exports.

Grid Interaction: Usability of grids throughout the solutions has been improved. It is now easier to select multiple lines to export or copy content to the clipboard.

System Template Detection: The flexibility of system template detection rules has been extended to include more variants of standard template names that would have previously counted as applications.

Usage KPIs: A new dashboard "Usage Category KPIs" has been added that gives insight on why applications are assigned their usage categories and provides additional KPIs on the apps in these categories.

Usage Overview Dashboard: Drill-downs have been improved by adding certain key fields to foundation level data rows that allow easier identification of database instances and replica sets without the need for additional joins.

Database Inventory: The usage by database type table will now consistently display "0" values instead of a mix of "0" and "-".

Department Detection: An issue was resolved that would lead to inconsistent results if department/location source field configuration was changed after data had already been collected.

Language Change: An issue has been resolved that would lead to an error if the UI language was changed multiple times in rapid intervals.

Pseudonymization: In rare situations, department and location names could be re-engineered even though they were obfuscated.

Session Timeouts: Timeouts for the reverse proxy have been increased, to allow for long running queries in DataMiner.

Similarity Clusters: The UI will now properly display and calculate if a custom similarity threshold is configured.

Usage Overview Dashboard: An issue was fixed where the app history chart would show the first N weeks instead of the last.

After installing the update, parts of the application may not be available until the data warehouse is rebuilt. This process runs automatically at night, but can be triggered manually after the update. On the first login after the installation, more information on this topic will be displayed, along with the option to trigger the rebuild.

Details on how to update to this new version can be found in the knowledge base article Upgrading iDNA Applications.