panagenda is proud to announce this new release of iDNA Applications. Whether you’re modernizing or migrating Notes/Domino, iDNA gives you the knowledge to deliver the most difficult projects efficiently, on time and on budget. This new version brings a lot of value with many new features, improvements and bug fixes. 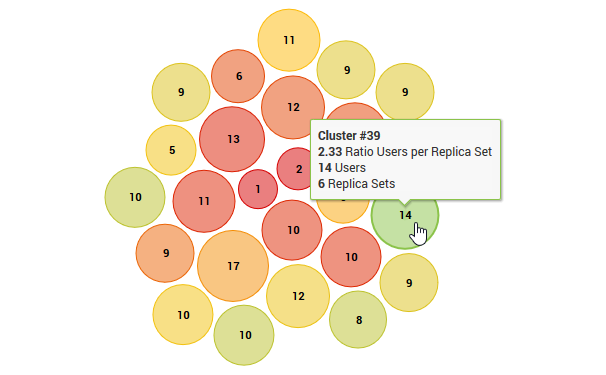 This new dashboard compares five common KPIs between the database instances of the same replica set in order to identify discrepancies between the databases. The KPIs point out common replication issues by analyzing data on document count, design age and template inheritance.

A long requested feature by enterprise customers is LDAP integration. You now have the ability to integrate with your directory infrastructure and use enterprise credentials to log into iDNA Applications.

Metabase: it is now possible to create nested folders in the navigation menu by creating sub-collections in Metabase

Notes Client Information: if connected to a MarvelClient Analyze database, information on users and Notes clients can now be analyzed in DataMiner and Metabase.

The interval of design collection upon design change has been reset to the new default and recommended setting "Weekly, on Saturday (Recommended)"

The previous default configuration of "Next day" may cause a continuous design re-scan of a large amount of databases if certain design refresh settings in Domino are enabled. This continuous re-scan may have negative impact on performance while creating little to no benefits.

Changing this setting in a compulsory way was a highly exceptional action and not done lightly. Of course, it can be freely (re-)configured using the page [Settings] → [Database design re-scan options].

Consolidation Potential: the calculation for this category has been updated and streamlined throughout iDNA. The new calculation works as follows: no or very low usage in recorded history and no usage in the last 90 days across all DB instances.

Data Collection: several improvements were made around detecting issues with data collection (e.g. expired Notes ID password) earlier. A weekly warning email has been added and it's now easier to recover from a collection outage.

Database Types: the interface for database re-categorization has received a number of improvements. It can be accessed via [Settings] → [Database Recategorization Rules].

Metabase: the application has been upgraded to version 0.34.1. Please see the release notes for more details.

Server Catalog: this grid has undergone a re-design to help with identifying collection issues. What used to be the "Details" column set has been enhanced and is now the "Default" column set and vice versa.

DB Details: a bug has been resolved that would lead to a wrong "last modified" date to be displayed in Database Details

Domlog Collection: an issue has been resolved where too much text in the "user_agent" column could cause and issue when storing data to the database

Duplicate DBs: a bug has been fixed that could, in rare situations, lead to databases being displayed twice in Catalog

Metabase: a misconfiguration has been resolved that lead to the default user accounts being unable to ask custom questions

Metabase: several typos have been corrected in dashboards in the Usage category

User Activity: a bug has been fixed that lead to counting certain users twice if user anonymization/pseudonymization was enabled

User Rename: an issue has been fixed around handling user renames. Upon rename, the new name will now be properly reflected in iDNA Applications

After installing the update, parts of the application may not be available until the data warehouse is rebuilt. This process runs automatically at night, but can be triggered manually after the update. On the first login after the installation, more information on this topic will be displayed, along with the option to trigger the rebuild.

Details on how to update to this new version can be found in the knowledge base article Upgrading iDNA Applications.